Around 10 people a week take their own life in London. If someone was in crisis, would you know what to say?

Around 10 people a week take their own life in London. If someone was in crisis, would you know what to say

We’ve partnered with the Zero Suicide Alliance, who have created a training program to help people to be able to identify warning signs and to feel comfortable having conversations about suicide.

Now more than 300,000 amazing Londoners have accessed suicide prevention training since the launch of the Zero Suicide LDN campaign by the Mayor of London in 2019.

It only takes 20 minutes. But it could make all the difference to someone in need.

Learn to save a life… take the training today. 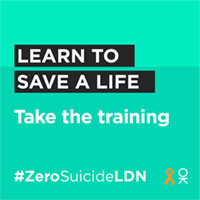 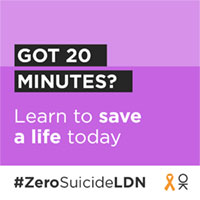 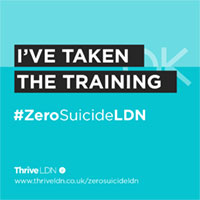 We have also produced a full campaign toolkit, with suggested wording for social media posts, and a lot more images and GIFs to use.

Don’t forget to use the hashtag #ZeroSuicideLDN

Thank you to our partners and supporters

The campaign is supported by the Mayor of London and partners including the NHS in London, London Councils, London’s police forces, Transport for London, and other emergency services, such as London Fire Brigade and the Maritime and Coastguard Agency, alongside voluntary, community and sports groups, London’s businesses and the private sector and many more.